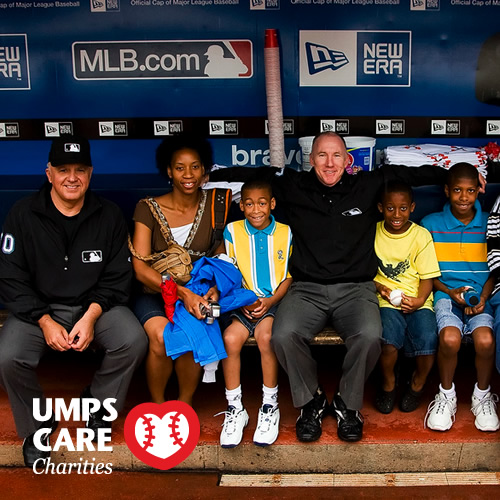 Umpire Jim Reynolds has been a part of a lot of memorable events in his 10 years on the Major League staff.

Reynolds has officiated All-Star Games and postseason series, but the veteran ump still thinks one of the most rewarding and exciting parts of his career has been his work off the field, with UMPS CARE, the official charity of Major League umpires.

The charity, of which Reynolds sits on the board, was established to both financially and emotionally enrich the lives of at-risk youth and also those dealing with serious illnesses. Reynolds, one of the most active members, has assisted in nearly every aspect of the organization, including the heavy lifting — fundraising.

The continuation of UMPS CARE's efforts, like any charitable endeavor, relies heavily on fundraising. One of their most successful endeavors has been the UMPS CARE online auction, which has returned for its second year and will run through March 22.

All of the proceeds from the auction go toward the organization's youth charity programs, but especially to support the organization's Blue Crew ticketing program, which provides an opportunity for at-risk children and children who are waiting to be adopted to attend Major League games.

"We raise the money to be able to purchase where we need to purchase," UMPS CARE executive director Samuel Dearth said. "When we started the program, we said we're not just going to be a ticket organization. If you are a 10-year-old boy or girl, and you're in that environment, you'll see that there are parents with their kids and those kids are getting everything."

The online auction, from which all proceeds benefit the organization's youth charity programs, will feature more than 100 items, including tickets to the 2010 MLB All-Star Game, a jersey signed by President Barack Obama and memorabilia signed by baseball greats, such as Jim Rice and Harmon Killebrew. Clubs have also donated packages through which fans can bid on batting practice experiences, jerseys and other equipment.

In 2009, the auction raised more than $20,000, according to Dearth, but he qualified that it's hard to gauge the success of the auction in just those terms, because it was held in conjunction with the organization's golf classic. This year, the auction is being held separately to coincide with Spring Training.

"It's a great way to reach people at all the different ballparks," Dearth said of the auction. "It's just a great opportunity to get more people involved."

Fans can sign on to UmpsCare.com and follow the links to the auction to bid on the merchandise and contribute to the charity through March 22.

The ticketing program, in its fourth year of operation, has hosted more than 3,000 children through various children's organizations.

The Dave Thomas Foundation for Adoption, one of UMPS CARE's largest partners in the program, deals specifically with children who are in foster care waiting to be adopted. The program allows the children to attend a game, get a goody bag of treats and enjoy the full experience, with food and souvenirs provided and then take a picture on-field with the participating umpires.

"I was lucky enough to grow up in a very middle-class, white-collar household," Reynolds said. "I didn't really want for anything growing up as a kid. I remember one of the things my father did as a kid was take me to ballgames. When I realized that not every kid gets that opportunity, it's really fulfilling to see for me that we can provide — for lack of a better term — a normal day."
The foundation is able to provide a memorable day of baseball for the kids, but according to Dearth, it can also serve to reinforce the efforts of the recruiters' main goals: to find the children permanent homes.

"It's a two-way street," Dearth said. "In order for a boy or young boy to be adopted, [the recruiter has] to have the cooperation and trust of the child. This gives them an opportunity to share with their kids in their care to strengthen that relationship. The baseball experience is a fun experience. But what we hear from 'Wendy's wonderful kids' recruiters is nothing but positive feedback, because it is just an opportunity for the kids to get down on the field, do something unique, make those kids feel special."

Each season, Dearth estimates, each Major League park will have different groups of children visiting for four games.
While the ticketing program is certainly rewarding for the children, as Reynolds can attest, the effect is not lost on the umpires themselves.

"It's been really neat over the years meeting these kids and seeing them smile and how much fun they have. It's been a tremendous experience for me too. After we say goodbye to them at the games and they go up to their seats, and I'm going back to my locker room, I always kind of catch myself and shake my head and realize how lucky I was. I think it's given us a sense of awareness of what's going on."

Bailey Stephens is a reporter for MLB.com. This story was not subject to the approval of Major League Baseball or its clubs.