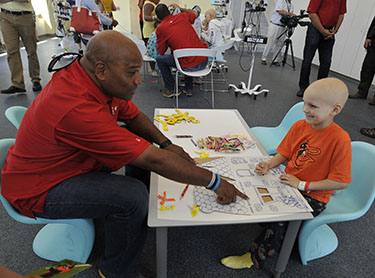 You’ve no doubt heard the old expression, “Nobody loves the umps.” (Check out this clip from “I Love Lucy” with Bob Hope.) Well, that’s not necessarily true.

After a visit from the men in blue earlier today, a bunch of kids at the Johns Hopkins Children’s Center think the oft-criticized arbiters are some of their favorite people.

Scott Barry, Laz Diaz, Pat Holberg and Jeff Nelson – the crew assigned to tonight’s Rays-Orioles game at Camden Yards – spent part of Wednesday at the hospital as part of the Umps Cares Charities Blues for Kids program. The Oriole Bird stopped by, too, offering children with serious illnesses some encouraging chirps and Build-A-Bear stuffed animals.

Each kid was able to choose from a variety of pre-stuffed animals, as well as clothing for their new-found furry friends. Naturally, a bear-sized Orioles uniform was among the choices.

A nice gesture from a bunch of guys who are often on the wrong end of fan sentiment. They may make some tough decisions, but they’ve got hearts of gold.