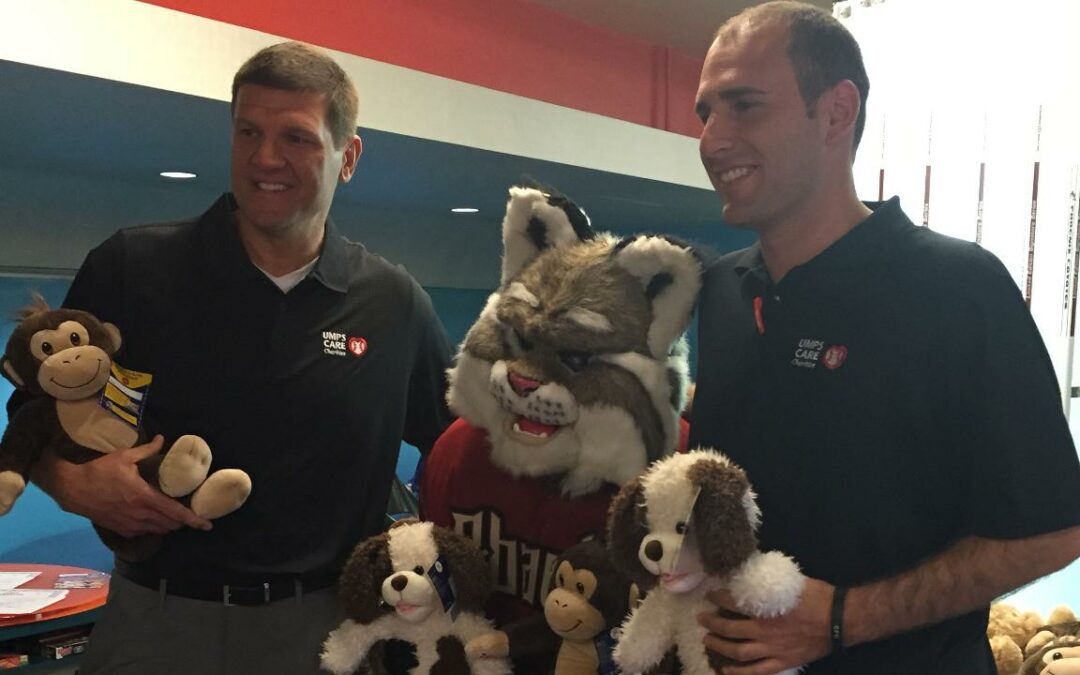 PHOENIX — As a professional umpire, Chad Fairchild makes plenty of tough calls on a daily basis. However on Tuesday morning, Fairchild had to make a different type of decision: Batman or Spiderman?

While Fairchild was visiting Phoenix Children's Hospital as part of an UMPS CARE Charities initiative, a young boy asked him to help dress up his new stuffed animal. Fairchild chose Batman.

Fairchild and fellow umpire Pat Hoberg, who are representatives of UMPS CARE Charities, and D-backs mascot Baxter spent the morning at the hospital passing out stuffed Build-A-Bear animals, while interacting with the patients and their families.

"I didn't have any expectations. I didn't know exactly what it was going to be like," Fairchild said. "I was a little bit nervous, I was a little bit scared, not knowing what to expect. Now, once I'm here, I wouldn't want to be anywhere else. It feels great to be here."
UMPS CARE Charities puts on numerous events each year, and it has hosted 108 hospital events since 2006.

During Tuesday's hospital visit, children were given the option of a stuffed bear, dog or monkey. After picking up a box and an animal, the children had to choose an outfit. Many of the outfits were superhero themed, such as Batman, Spiderman and Wonder Woman.

"[The season] is a long grind, and we're in that time of year right now — late August, early September — where we're really grinding it out," Fairchild said. "The biggest sacrifice we make is being away from our own families, and that's really tough, so this gives us a moment to step back, put everything in perspective and see what's really important."

Tuesday's event was Fairchild's first, but likely won't be his last.

"It's a great day," Fairchild said. "Sometimes you feel helpless, but being here, you give back a little bit."

William Boor is a reporter for MLB.com. Follow him on Twitter at @wboor. This story was not subject to the approval of Major League Baseball or its clubs.