Get to Know an Ump – Gerry Davis 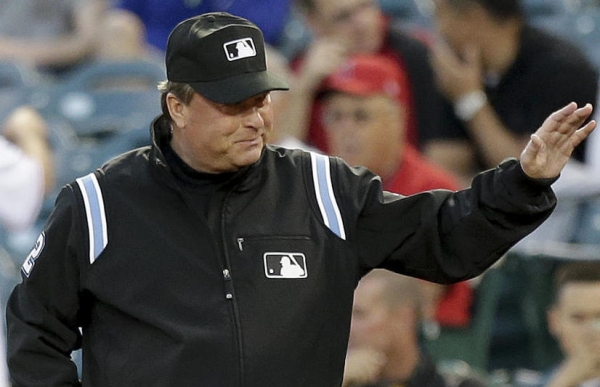 Gerry Davis didn't grow up wanting to become a major league umpire. Gerry grew up in St. Louis and like every red-blooded kid at that time he wanted to become a baseball player.

Gerry played baseball and basketball growing up and went on to play for a travel baseball team.  During that time he hurt his arm so couldn’t pitch. His coach told him since he was hurt and couldn’t play, he would umpire the game saving the $8 or $10 the coach would have paid the umpire. After the game his coach saw Gerry had an eye for balls and strikes and suggested he go to umpire school. Unbeknownst to him, the coach sent away for the application and had it mailed to Gerry’s house.

While he wasn’t sure about umpiring as a career, he had a knack for it and it took him all the way to the major leagues. He said, “I knew I wanted to be involved in sports in some capacity because sports had always been my passion growing up.”

Gerry went to Al Somers’ umpiring school in 1976. He recalls, “Even when I went to umpire school I didn’t know that’s what I wanted to do. Once I got there and got immersed in it I fell in love with it. I got to learn everything there is about umpiring….positioning, mechanics and more. It was everything I had been looking for.” Gerry finished first in his class and began his minor league career.

Gerry spent six years in the minor leagues. “I was always fortunate enough to have very good crew partners. I didn’t make a lot of money but I have fond memories of that time.” Gerry umpired in the Midwest league, AA, the Eastern League, and American Association. During the off-seasons he went to the Florida instructional league and the Puerto Rican winter league. He loved his time in Puerto Rico. “It was a great time down there. It was my first time outside of the U.S. and I appreciated living in a different culture …….It was also great because the six umpires that were there pretty much all lived together in the same area so there was a lot of camaraderie.” Gerry’s first big league game was in Montreal on June 9, 1982, the Cardinals vs. the Expos.  The Expos were in the pennant race so it was a sold out game.  Gerry recalls the day: “It was special. It was televised back in St. Louis so all of my friends and family got to see it. I worked 1st base – and after my first call one of my partners, Jerry Crawford, rolled the ball to me for keeps.”

Gerry is now in his 34th year in the major leagues and is the longest tenured crew chief. He has worked four All-Star Games, 12 Division Series, 10 League Championship Series and five World Series, giving him the most post season games worked by an umpire in MLB history. When asked what advice he gives to younger umpires, he stated, “Continue to work hard regardless of the score or the game. Someone is always watching. You need to treat each game like it’s the biggest game you’ve had.”

Gerry got involved in UMPS CARE back when it was first forming and the mission was to support people in the umpiring community who had fallen on hard times. He has stuck behind the cause throughout the years and enjoys doing the hospital visits, bringing smiles to the children’s faces.

In His Free Time

Gerry is a big country music fan. He likes Garth Brooks, Toby Keith, and George Strait. He gets out to concerts every chance he can. He is addicted to USA Crossword and Sudoku, so does those puzzles daily. Gerry is also a big Green Bay Packer fan. He said, “If you spend the winters in Wisconsin you are either a Packer fan or an ice fisherman.”

If Gerry were not an umpire he would be involved in sports in some other capacity. Gerry coached  junior college basketball during the off-season at the University of Wisconsin at Fox Valley. For many years he also officiated basketball. He says he utilized a lot of the same skills but noted the biggest difference was, “ In basketball, after a call, you put the ball in play and the game goes on. In baseball, if a manager has a disagreement they come out on the field, stop the game, and argue with you; it doesn’t happen in basketball.”

Gerry also focuses on his officiating equipment business, Gerry Davis Sports. It all started when he redid the umpires plate shoe in 1997.  He recalls, “At the time there were two different types of shoes. One was a very athletic shoe, which allowed us to run around but did not have enough protection, and one was a big steel worker shoe, which had all types of protection but was not athletic. I said, ‘Let’s combine these two into one shoe.’ I went to Cove Shoe company outside of Pittsburgh and we developed a shoe. It was immediately very successful so I started a business out of it.” Gerry Davis Sports has all kinds of officiating gear because, as Gerry knows, most amateur umpires officiate other sports as well. – See more at: http://umpscare.com/Newsletters.html#Winter 2015 Edition