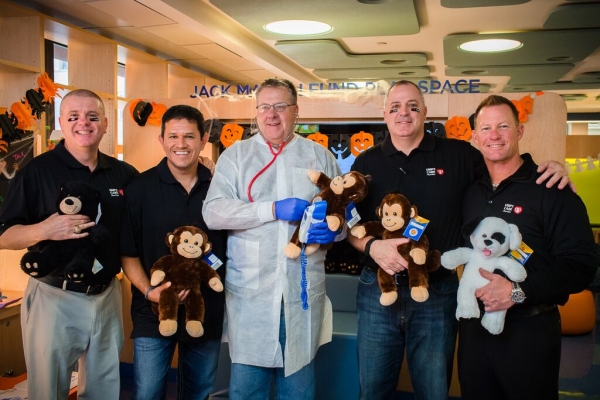 Major League Baseball umpires strive all year to become the man in black on baseball’s greatest stage, the World Series. It’s a privilege, an honor, and it’s the ultimate achievement. When it’s an umpire’s first World Series, you’d imagine that there would be extra pressure placed on their shoulders. There’s something you’ll notice about umpires though: they’re not like the rest of us.  They embrace the stress to the point where they don’t even feel it.  Jim Wolf is a shining example of this. Like his colleagues, the man affectionately known as “Wolfee” didn’t shy away from the pressure of the bright lights; not in the least.  Jim Wolf seized the opportunity to become a member of a hand-picked crew representing the officiators of baseball.  He took every moment of this incredible experience in stride and even found a way to share his career’s greatest accomplishment.  Despite it being his first visit to the big dance, Jim Wolf and his fellow blues didn’t just relish in the spotlight of their own career achievement, they brought some of that World Series magic to share with children hospitalized at Mount Sinai Kravis Children's Hospital located in New York City.

It all started with an early morning phone call: “Wolfee, this is Randy Marsh (Director of MLB Umpires).  Call me back… You’ll be glad you did.”  He was glad he did, but he didn’t feel any added nervousness because like all umpires, he’d worked hard to get to this point. Plus, Jim Wolf is a seasoned man.  He’s been behind the plate during a perfect game.  He witnessed the breaking of a Ty Cobb record.  He was selected to the 2010 All Star Game, and is a seasoned veteran of multiple post seasons.  Still, from that point forward, he knew his life had changed, and an overwhelming sense of honor overtook him.  This was the World Series!

He and his fellow crew-members executed their officiating of the World Series with class and professionalism.  Being on the field for the final series of 2015 is something they all enjoyed, especially Jim and his fellow first timers Bill Welke and Mark Carlson.  And while Jim didn’t feel any added nervousness, you can hear the excitement in his voice as he talks about Game 4, when he was selected to be home plate umpire. “Throughout my entire baseball career, I had never experienced such an intense adrenaline rush from the first pitch to the last out like this game.” Golfing with Jim for the UMPS CARE 100-Hole Golf Marathon, in which he and his fellow umpires raised over $51,000 for UMPS CARE programs, I got the privilege to ask him what that was like, to which he replied, “Oh man it was so cool.” You know what’s even cooler about Jim Wolf though? It’s his dedication to not just his career as an officiator, but his outright determination to make human connections and brighten children’s lives.

UMPS CARE Charities is a non-profit that Jim is heavily invested in, and the aforementioned $51,000 that he and fellow umpires raised for the charity contribute to a variety of programs, including visits to children’s hospitals across the country.  Despite participating in the biggest series of his life, and enduring the mental preparation of a Game 4 plate assignment, Jim Wolf and his fellow colleagues brought some of that World Series charm to the Mount Sinai Kravis Children’s Hospital of New York. Teaming up with Major League Baseball’s S2UC, the 2015 World Series umpiring crew and UMPS CARE Charities hosted a World Series Build-a-Bear workshop for the children whose young lives consist of battles far more serious than a game of baseball. Wolf and the Crew also went room to room visiting the children who couldn’t make it to the workshop, delivering bears and the excitement of the World Series to their bedside. For one day, Wolfee and the crew were able to bring baseball’s brightest moment to the children hospitalized at the Mount Sinai Kravis Children’s Hospital. When discussing the visit, you can tell it really affected him: “Being able to possibly make a contribution and a difference for a day, or just a few moments, by putting a smile on someone’s face…it’s an honor and a privilege.  The kids are so great, and courageous.”

You see, while us normal folks get sucked into the bliss of watching our favorite teams duke it out over nine innings on the grandest stage in baseball, Jim Wolf and his colleagues, the men in black on a field of dreams, quietly conduct their profession with the utmost care, class, and passion. While us normal folks are captivated by the aura of the game and tell our children about heroism on a baseball diamond, Jim Wolf and the crew are never blinded by the bright lights.  They see through them, and they recognize that the true heroes are patients fighting for their lives in Mount Sinai Kravis Children’s Hospital. If that’s not clear to you now, it’s illuminated as Jim tells you about his most fond memory of the World Series. It wasn’t the Game 4 plate assignment, it was when he and Alfonso Marquez were “visiting with a teenager from Venezuela.  He spoke better Spanish than English, and after some conversation he told Fonzy in Spanish, ‘Thank you for making my day.’ When Fonzy translated that to me and the nurses, I almost broke down in tears,” because “that right there is what makes this program so rewarding…to put a little light in some dark times.”  Jim Wolf prepared for the greatest accomplishment of his career, but it didn’t outweigh the importance of trying to make a difference in someone’s life.