Get to Know an Ump – CB Bucknor 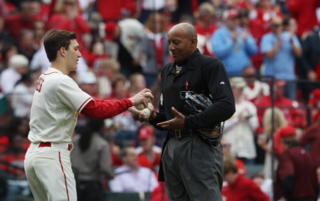 Depending on when you ask CB Bucknor what his initials stand for, you may get “Care Bear” or “Charlie Brown.” But to his fellow umpires, it’s just CB.

CB was born in Savanna-la-Mar, Jamaica, in the parish of Westmoreland. He has fond memories of his childhood there. At the age of 10 in 1973 he and his family—which included his parents, two brothers, and sister—moved to Brooklyn, NY. CB spent his teenage years in Brooklyn and still lives there today with his own family. As CB remembers, “The move was an exciting transition but definitely a challenge. I had to make new friends, go to a new school, learn a new system… I was lucky that my two brothers were close to me in age so we all went to the same school.”
One of the things that helped make the transition easier was playing sports. CB and his brothers grew up playing football (American soccer) and cricket. “Cricket is very big in Jamaica and the closest thing I could find to cricket here in the U.S. was baseball,” he said. “So I quickly picked up the sport and continued playing throughout my life.” CB played in the Bonnie Youth Baseball Club in Brooklyn and stayed involved after he had graduated from high school and went on to college.

Unlike many other umpires he did not grow up wanting to be a Major League baseball player.  CB kept baseball as a part of his life through coaching and umpiring but he had other career plans. He graduated from State University of New York at Cortland with a degree in Therapeutic Recreation with the intention of helping children. He states, “I was working at a New York hospital and had been there for years in the Child Life Department. I used to work in the playroom like where UMPS CARE does their hospital visits.  That’s what I wanted to do, I wanted to work with kids.”

Fate had other ideas, though. A couple of the umpires that he knew had gone to umpire school and they suggested he go to increase his knowledge and umpiring skills. That’s how he ended up at Joe Brinkman’s umpiring school in 1990. When he went, it didn’t dawn on CB that this could become his next career. “I had been working at the hospital for five years and used my five weeks of vacation to go to umpire school,” he explained. “At the time, I didn’t realize this would become a full-time thing. I didn’t even have the right equipment. I pretty much bought all of my equipment from one of the vendors there. Then one thing led to the next and I went from Joe Brinkman’s umpire school to umpire development camp.”

The Joy of Minor League Baseball CB spent 10 years in the minors and remembers that time with great fondness. “Being in the minor leagues brought you much closer to people, especially the partners that you were with,” he said. “You were driving from city to city and enjoying that, it was a wonderful experience. I remember looking forward to catching up with other umpires in different cities. I met a lot of people. The camaraderie and the bonds that I developed were great. You have more contact with people in the minor leagues.” CB spent time in the NY Penn League, the Carolina League, the Eastern League, and the International League. His favorite time was the Carolina League and he is still friends with many of the people he met.

This is CB’s 27th season as a professional umpire and 18th as a major league umpire. He remembers his first Big League game, “It was April 4, 1996,” he recalled. “It was an unfortunate reason why I ended up working my first game. John McSherry had a heart attack in Cincinnati so a lot of the umpires had to be moved around to make the funeral. It was very early in the spring so when I got the call, I wasn’t sure they had the right person. I hadn’t even started in the International League yet.” CB was at third base and remembers it as a fairly calm game.  He didn’t come up to the majors again for another year or so but he recalls his first game like it was yesterday. Since joining MLB full time, CB has been an umpire for the 2005 All-Star Game and the 2007, 2008, 2009, and 2013 American League Division Series.

In his free time CB focuses on helping others, whether through his work with UMPS CARE Charities, his hobbies, or his own foundation – the Westmoreland Treat 54 Foundation. He also likes to take on projects and work with his hands. “I like woodwork, building things, restoring things, refinishing furniture,” he said.” “I get excited going into Home Depot seeing all the stuff that you can build that you can do. In a different life I would have been a builder or contractor.” These skills have come in handy with his personal foundation. The Westmoreland Treat 54 Foundation came about as he sent goods and went back to help people from his home parish in Jamaica. Growing up, when you did something nice for someone it was called “treating them” and his umpire number is 54—hence the name. The foundation was born in 1995 and celebrated its 20th anniversary last year. The foundation does a number of wonderful things for youth and elderly in his community including collecting baseball equipment, helping seniors rehabilitate their homes, and giving out merit scholarships to students going in to high school. The biggest event they hold is “Treat Day” which is held the first Sunday in December to give age-appropriate gifts to 900 kids, which is often the only thing they will get around the holidays.

In addition to his own work CB is dedicated supporter of UMPS CARE.  He understands the importance of giving back and has been involved in the BLUE Crew ticket program, the BLUE for Kids hospital program, as well as a visit to Walter Reed National Military Medical Center. His favorite UMPS CARE memory is from a hospital visit in Chicago. “While handing out teddy bears at the children’s hospital we met this wonderful young girl and her parents,” he remembers. “We obviously left a lasting impression. A few days later her parents and sibling were at the White Sox game on the third base line. They sent a note with the security on the third base side thanking us for visiting us at the hospital, stating our crew visit made a big difference to her—it was pretty incredible.”

Despite his career taking a different path, it is clear CB has managed to maintain his passion for helping kids and continues to make it a priority in his life. Perhaps his third career will be in non-profit management. And in case you were wondering, CB stands for the C to the B (Wikipedia got it wrong.)