A Day In the Life 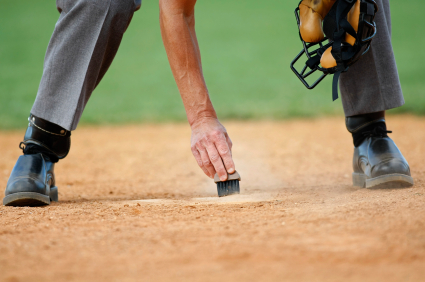 Fans across Major League Baseball and even personal friends seem to have this common misperception that the rule enforcers of the game simply emerge out of the shadows of the clubhouse, officiate the game, and call it a day. A misperception that an umpire’s sole responsibility is to put on their uniform and make calls. Has anyone ever actually asked an umpire how much preparation a game requires, or, what fills up their days? Well, we did, and I’m here to tell you that this perception couldn’t be further from the truth.  Umpires of America’s pastime face the same, if not more, scrutiny, arduous travel, and additional duties that the players face!  Becoming an umpire at the game’s most elite level requires decades of training, preparation, studying, and officiating. This process often starts at the little league or high school level, and is followed by rising through the minor league ranks of A, AA, and AAA baseball!  The extra personal and professional responsibilities of an umpire begin to take shape as their careers develop. They are often multi-faceted and reach vastly outside the game, especially as many umpires are heavily involved with UMPS CARE Charities!  Combine that with a life lived out of a suitcase from March to October, being a professional umpire can be unpredictable. Fortunately, umpires Clint Fagan, Ted Barrett, and Jim Reynolds allowed us to take a look at their lives, and experience a day in the life of a Major League Baseball umpire.

“Well, no day is the same,” chuckled Crew Chief Ted Barrett as I asked him the loaded, “What’s a typical day like for you?” question.  “There’s not as much down-time as you’d think. . .For a three-day series, your first day is traveling on about four hours of sleep, followed by preparing for the next travel day which could only be forty-eight hours away.  We’ll eat if there’s time.” There’s rarely time, and umpires often wait until they get to the ballpark for a snack to get them through the game.  Food and sleep are luxuries for Ted and his fellow umpires, as Ted told me “I think the average fan would be surprised to how little rested we are.” And hungry! Umpires often don’t receive a full meal until the second day of the series. Despite not returning to his hotel until 1030pm or later — Ted’s days begin early by implementing his infallible leadership; professionally and spiritually.

As the senior umpire and crew chief, he’s responsible for sorting out flights, hotels, rental cars, and helping with the professional development of he and his crew.  “If there is a particular problem, the crew chief is the leader, trainer, and encouragement.”  In the event of a rough night, Ted leads his crew through it.  In the event of a rough patch of life, the umpires support network is themselves, and Ted takes that to heart.  Not only does he and his crew support themselves, but he is also the leader of the “Calling for Christ” professional umpire ministry, and conducts weekly prayer calls via Skype. This service that Ted provides makes an immense impact among the umpire community, especially in times of heartbreak or loss.  Yes, umpires have families too, and unfortunately umpires have lost loved ones.  They look to one another, and “Calling for Christ,” for support.  Ted Barrett also somehow manages to find time for UMPS CARE Charities, and looks forward to hosting kids at the stadium and conducting hospital visits for the charity.  As does Jim Reynolds, who’s days are also packed to the brim!

Jim’s days almost always begin with a phone call.  As a leading representative and advocate for umpires within the umpiring union, he receives daily reports or briefings regarding the previous day.  These phone calls can consist of anything as benign as a replay review, to something more extreme such as an ejection, and generally involve another phone call to the union itself.  He also serves as the secretary for UMPS CARE Charities, a position he absolutely loves holding.  He combines these duties with familial responsibilities as he is a father and husband, and living life on the road for seven months of the year can make it obviously difficult to see family. Jim and Ted both try to fly family out to see them on the road when it’s possible, because when it is possible, it can be the only time that umpires get to spend time with their family on the road.  There are no home stands for officiators!

However, family visits for umpire and recent call-up Clint Fagan are much more difficult to plan, as he has spent around seventy games in the majors, and the other half of the season in AAA.  “I always keep my bags packed, because you never know when you’ll be getting the call,” Clint tells me from his hotel room.  His days are different than Ted’s and Jim’s.  He does what he can to spend as much of his time with the crew as possible, because “you learn a lot from major league umpires,” knowledge that he takes back with him to AAA and shares with his brethren there. Professional development is a huge focus for Clint and his fellow umpires, because as Ted relayed, a big “misconception is that umpires have no accountability.  Umpires have more accountability than anyone in the game!” Umpires are graded on each and every game, each and every pitch thrown, and everything they do is subject to review and report.  In a game in which the players are lauded for doing it right three times in ten attempts, umpires are ignored for getting all their calls right, and chastised for a solitary mistake.

Despite the criticisms of the job and tumultuousness of their day-to-day schedules, there are two things that Ted, Jim, and Clint glaringly have in common. The first: They care deeply about their profession.  It’s evident in their voices, and in their candor on and off the field.  “Regardless of your level, you take the same work ethic to the ballpark every day, every game is umpired like the last game of your career, and you try to get every play right…It’s a dream job,” Clint tells me. Jim has expressed similar sentiments, as he told me that “We take our jobs very seriously, and we work hard.  There’s no one in that stadium that wants the right call more than we do.” The second thing? It’s something that Ted, Jim, and Clint all hold closely to their heart: an UMPS CARE Charites event.  It’s especially personal to Clint.  Clint confessed, “I’ve had family members with terminal illnesses, and know first-hand about how hospital visits can make an impact.” Having the opportunity in his big league call up to conduct an event in Denver two weeks ago, Clint told me, “It was an amazing experience.  The children were upbeat, had great energy, and we were able to have a lot of fun together…and seeing the light in the child’s eyes, wow.”

You see, the men dressed in black are more than what meets the eye. They take each day of the seven-month road trip in stride, and approach every day with ardent passion, care, and love. Whether it’s finding time to spend with family, developing themselves professionally, caring for their colleagues in times of need, or dedicating their time and money to UMPS CARE Charities, they tackle each responsibility not as a task, but as an opportunity to grow and become a better father, husband, umpire, and person. They don’t just show up to the ballfield, call the game, and go home.  They work hard, day in and day out, to make the right calls on and off the field.