Get to Know an Ump – Gary Cederstrom 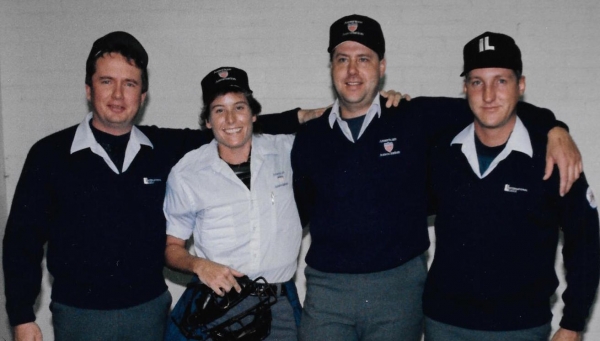 A North Dakota boy, Gary Cederstrom was born October 4, 1955, in Bismarck, N.D., and grew up two hours north in the city of Minot, N.D. He played basketball through high school and baseball through college, where he lettered for the Minot State College Beavers. That was the end of his playing career, but by then another career was well underway: umpiring.

“When I was a young kid I’d go along with my dad when he would umpire softball and baseball,” explained Cederstrom. “I’d keep score, shag balls, and watch the game.” When he got older, his father suggested he start umpiring youth baseball to make some extra money. Soon enough he was umpiring in softball leagues while in college, then at the prestigious Bill Kinnamon Umpire School before winding his way through the minor leagues up to the majors.

Still, he never took any of it for granted. When asked when he thought he might have a career in umpiring, Cederstrom laughed and said, “When I got invited to spring training for the first time.” Cederstrom recalls his first game umpiring in the majors as being sometime around Memorial Day in 1989, perhaps early  June—the Chicago White Sox against the Minnesota Twins. The biggest thing he remembers from that game? “The lighting,” he said. “The lighting is just so much better than it is in the minor leagues. It makes it a little bit easier to see the ball, no doubt about that.”

He was hired full time by Major League baseball eight years later, for the 1997 season, and promoted to a crew chief 11 years later, in 2008. He’s worked two All-Star Games, seven Division Championship Series, and six League Championship Series, but lists the three World Series he’s worked—2005, 2011, and 2015 as crew chief—as his career highlights. “I mean, it’s the series of baseball,” he said. “Not everyone gets there, even in the umpire ranks. It’s an honor.” Cederstrom currently lives in Melbourne, FL, with his wife, Theresa, and a dog at home. He has two daughters who are married with children, and a son currently at Florida State University. In the offseason, he puts his past as a basketball player to use as an assistant high school basketball coach, and enjoys watching hockey, basketball, and football.

If he didn’t find a career as an umpire, what would he be doing? “Probably feeling a lot better—I wouldn’t have the back and knees of an 85 year old,” he (half) joked. And, he said, he’d probably be teaching and coaching in some way.

Cederstrom has been involved with the charity from the start. “It’s a good thing helping out the kids,” he said. “It’s just a natural thing to do, if you ask me.”

The hospitals visits in particular make an impact. “It’s just fun to talk to the kids and try to brighten up their day,” he explained. “During the World Series we went to a hospital in New York and the nurses gave me a doctor’s smock and stethoscope, and some of the kids got a kick out of that. But just to put a smile on their face and have fun with ‘em. … It’s very heartwarming and humbling.”

What are Gary’s favorite things? We asked, he answered: