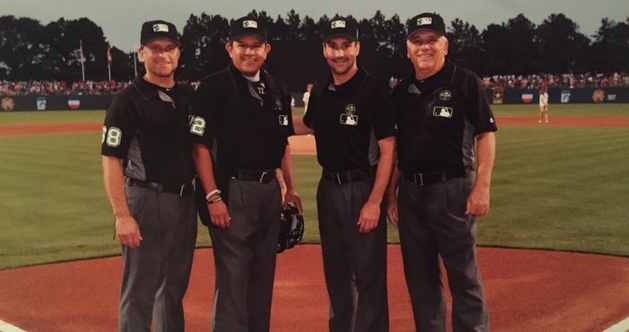 Major League Baseball paid tribute to America’s military heroes at Fort Bragg with the first professional contest of any sport to be played on an active military base.

MLB Umpire and Crew Chief Larry Vanover from Kentucky, Alfonso Marquez from Arizona, Chris Guccione from Colorado and David Rackley from Texas worked the three-game series between the Braves and Marlins over the Independence Day weekend, with the final game being played at Fort Bragg.

There was a record-breaking 12,582 in attendance, made up entirely of military families from Fort Bragg, where the teams took the field to honor the Nation’s servicemen and servicewomen.  Tickets were not made available to the public.  The base is so large that tickets for the game were raffled off to ensure fair opportunity for attendance was had by all.

Alfonso Marquez who worked home plate the first night said the atmosphere was one filled with respect and high energy. “There are so many heroes out there who have sacrificed for our freedom and paid a heavy price.  It was an honor to be a part of something that showed them our appreciation,” said Marquez.

All of the umpires who officiated the game have a tie to the military in their family and each commented what a unique and exciting experience it was to get to work in front of the troops and their families.  “We all have tremendous respect for what they do and it was nothing short of an honor for us to have this opportunity,” followed Vanover.Vanover said the special moments started before the game even began when the group took time to meet these families and heroes from all over while getting to hear their individual stories.