Get to Know an Ump – Fieldin Culbreth III 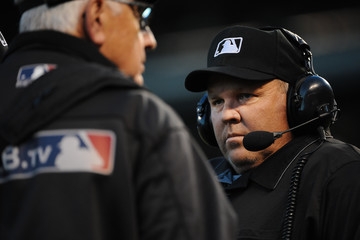 When asked about his journey to becoming an umpire, Fieldin Culbreth III says his story is no different than most little boys. "I wanted to play baseball. I sat in the backyard and dreamed of the 9th inning with bases loaded, 3-2 count, and then I hit out if park. I had no idea I would be calling a strike or a ball. I dreamed of being a player." With a name like his, the umpire known as “Cubby” is one you won’t easily forget. His father, Fieldin Henry Culbreth II, told him that during the Civil War two young soldiers became good friends and made a pact to that if anything were to happen to one of them, the other would tell their family. Sure enough, one died in battle and the other went back and reported it. The second man became a part of the kids’ lives, helping them throughout their childhood. One of the youths the soldier helped raise was extremely appreciative and loved this man and everything he stood for. When that child grew up, he had a son and named him Fieldin after the soldier who helped his family. That new baby was Cubby’s grandfather.

Cubby chased his dream of being a player throughout his childhood. He had a promising college career and was in his senior year when one morning he woke up with some pain in his arm. Two weeks later he had rotator cuff surgery. “In 1985 this surgery was the kiss of death for a baseball career,” he said. “It was much more invasive and intensive. … I really didn’t know what I was going to do.”

Culbreth’s college baseball coach, Gary Robinson, happened to have been a professional umpire at one point. Per the recommendation of his coach, Culbreth decided to go to umpire school—and one of his college teammates decided to go with him.

Culbreth recalls packing up the car with his surfboard getting ready to drive down to Coco, Florida “My dad thought I had lost my mind,” he said. “‘You going to go to a what?! You just left a university! What the hell is umpire school?!’ My father was always supportive but this one caught him on the heels of his shoes.”

Culbreth went to Joe Brinkman’s umpire school and five weeks later he and his teammate, Eddie Bean, were selected to go to the next level. “With 130-140 students at the camp and only 12 going on to the next round in Bradenton, Eddie and I were surprised we both made it.” He and Eddie are still great friends to this day.

Culbreth recalls his time in the minor leagues with great fondness, “Unlike now where we are flying first class and running from plane to plane, we were driving everywhere. It’s the strangest thing, back in the minor leagues, you didn’t have two pennies to rub together or a window to throw them out of but it had to be some of the most fun I’ve ever had in the game.”

Culbreth clearly recalls his first game in MLB in 1992. “I was in Takoma, Washington,” he said, “and I get a call at 5:30 AM telling me I was going to umpire my first big league game in Seattle the following night. It was everything I thought it would be and more.” He continued, “I was born and raised in a little town of 2,500. Everybody knows everybody and now all the sudden I’m standing in the middle of this stadium that’s got 30,000 people in it. It was everything that I had worked for.”

Since he was 22, Culbreth explained, the only job he’s known is an umpire. “I did 101 jobs before I went to umpire school,” he said. “I worked at a loading dock, in the orchard, boxing peaches, they were just filling jobs to make money.” But that night was the fulfillment of a dream—just not the one he had as a little boy.

Getting Involved with UMPS CARE “For me personally it’s very easy to get involved—it’s a crying shame to be involved in this profession and not to give something back,” said Culbreth. “We are so fortunate. We get to travel around and go to some of the biggest and nicest cities in the United States—cities that most people save up all year long to visit.”

Culbreth has been involved in the charity since its infancy, working with Marvin Hudson to do meet and greets with Big Brothers/Big Sisters back when it was still called Blue for Kids. “I loved the concept of it,” he said, and he’s been hooked since then, getting involved in all aspects of the charity.

“The first time I went on a hospital visit, I was a little timid,” he admitted. “No matter how you slice this up, they are still just kids. Even when they are sick, they are still just kids. But I see the difference it makes for those parents. Sometimes I can see it in their eyes through pain, sometimes through joy—but you can see it is making a difference, even if it is just for that minute or two, their kid is being a kid again.”

“That’s the reason you keep coming back,” he said. “It would be easy to say I can’t do it because it’s tough but at the same time those kids are there and they aren’t going anywhere. You just hopefully put a smile on their face and give their parents a small reprieve.” At home, Culbreth has three kids, ages 18, 15, and 12, and he does carpool duty when he’s around. “Dad’s a nerd and he’s embarrassing,” he joked. “I used to get a hug every time and now I have to put them out two blocks before school. I don’t let my kids get away with that. I told them early on, ‘I will embarrass you every day at school if you don’t give me a hug.’”

He loves to do crossword puzzles and will often arrive for pick-up early to do a puzzle in the car. “I always set my alarm because I know I’ll get a good nap in there too,” he said. “Before I got smart enough to set an alarm, I fell asleep and the cars behind me were honking their horns and there is my child waiting to get in.”