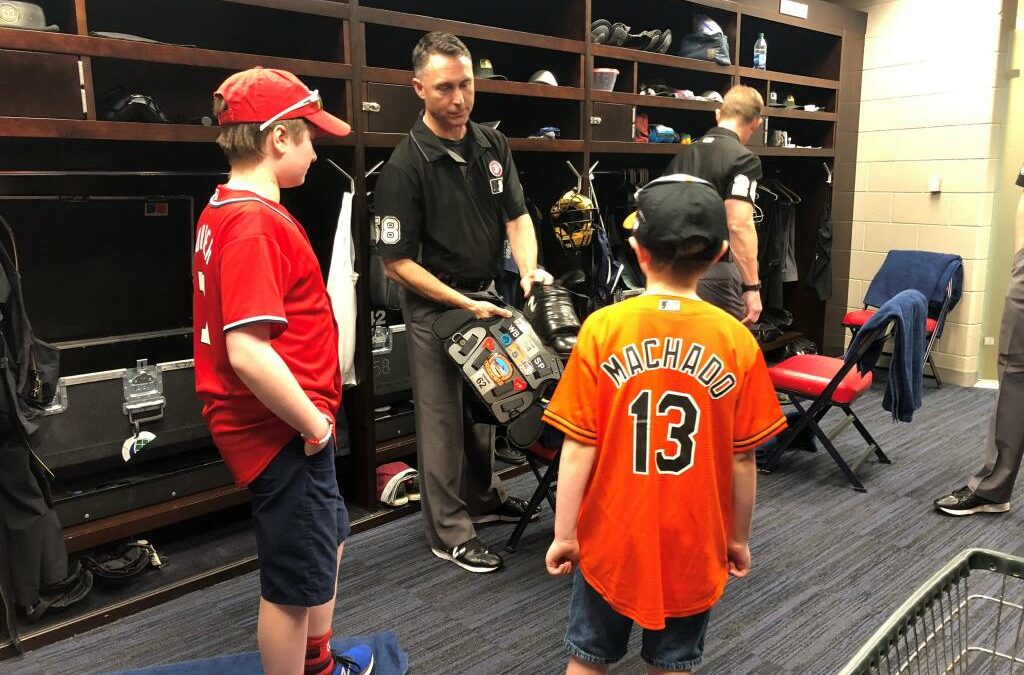 From coast to coast – from Washington state to Washington, D.C.  – Major League Baseball umpires took time out from their daily grind to create baseball memories for local organizations.

Among the invited guests were groups representing charitable organizations such as Big Brothers Big Sisters, the Dave Thomas Foundation for Adoption, the USO and Casey Cares. Each group enjoyed a behind-the-scenes experience at a Major League Baseball ballpark, and guests received goody bags with “all things baseball” – peanuts, popcorn, hats and more! They got to see how the umpires prepare for the game, go on the field and take photos and, most of all, go home with a baseball memory!
In Washington D.C., we had a very special group from USO-Metro join our MLB umpiring crew of Sam Holbrook, Dan Iassogna, Jim Wolf and Manny Gonzalez. The family has two boys, one of whom was diagnosed with Hodgkin’s Lymphoma in March. Both their boys eat, sleep and breathe baseball, and their father, Andrew “AJ”, has served as a coach. The family lives in Alexandra, Virginia, and the boys play in the Central Springfield Little League.  The family loves baseball so much they have traveled to about 17 different Major League and Minor League ballparks.

But they have never had an experience quite like the one they had before the Nats-Cubs game, where they were treated like VIPs. The boys loved their goody bags and thanks to Jim Wolf, they even scored extra M and M’s and Skittles.  Their whole family loved interacting with the umpires and taking their minds off chemotherapy and treatment at Walter Reed Hospital.

Baseball, as they discovered, has proven to be the best medicine.

“A huge thank you to the folks at UMPS Care for the incredible experience at Nationals Ballpark Saturday night,” Andrew, who served 28 years in the Marines, wrote us. “The casual baseball fan would have been impressed, but baseball aficionados like our boys were absolutely thrilled. The interaction with the officiating crew was phenomenal.  The guys were super nice, had great conversations with the boys, and were very accommodating.  A truly fantastic experience.  My wife and I are so incredibly grateful for everything UMPS Care and MetroUSO has done for both our boys.”

In Seattle, a group from the Dave Thomas Foundation for Adoption had the opportunity to meet with Brian Gorman, Mark Carlson, Scott Barry and Tripp Gibson. And in Arlington, Texas, we had a group of 19 – yes, you read that correctly – from Reviving Baseball in Inner Cities (RBI) come to the game thanks to Bill Miller, Doug Eddings, Mike DiMuro and Chris Conroy.

We also enjoyed our second Minor League Baseball BLUE Crew Ticket program experience of the season in Reno, Nevada, as the crew of Bryan Fields, Clint Vondrak and Sean Allen enjoyed time with a group from Big Brothers Big Sisters of Northern Nevada.

This season alone, UMPS CARE will provide experiences like these to nearly 800 participants – connecting local organizations to umpires through the game we all love.

Thanks everyone for your continued support!