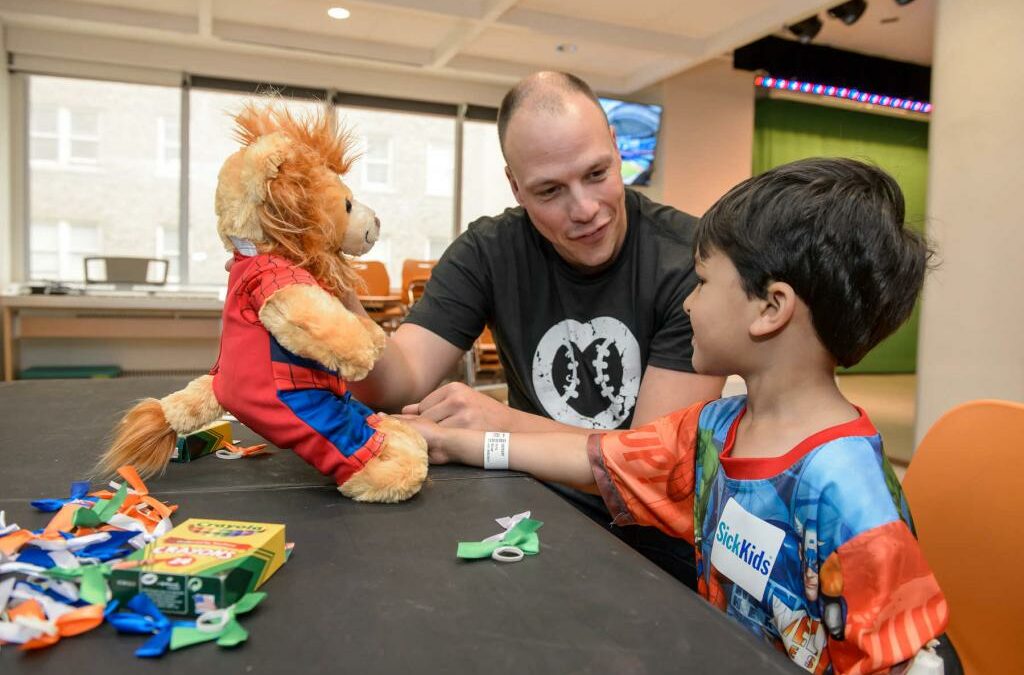 For umpire Stu Scheurwater, it was extra special to work a game in Toronto. Even though his hometown of Regina, Saskatchewan, is 2,500+ miles away from Toronto, it was an opportunity to set foot on Canadian soil.

And little did he know that he and his fellow crew members who were working the Boston Red Sox-Toronto Blue Jays series would make an impact on the life of a family from Saskatchewan.

The MLB umpiring crew of Scheurwater, Mark Wegner, Alan Porter and Roberto Ortiz took time out from their busy schedule to visit critically ill kids at The Hospital For Sick Children in Toronto.

“I actually met a young child today who’s from Meadow Lake, Saskatchewan,” Scheurwater told Alexis Brudnicki of MLB.com later that day. “I got to talk to the child and the mother, said hello to them, and talked a little about Saskatchewan, where I’m from, and it was really neat to have that connection.”

“The best part about it is that they got good news, and they’re going back to Saskatchewan,” he added. “It was really cool to hear that, it gives me goosebumps just thinking about it, to hear they’re going home after spending 3 1/2 months there, it’s such a great thing.”

The hospital visit was one of 16 umpires will make this season alone. Umpires distribute 100 Build-A-Bear stuffed animals to children at each of these visits. Most importantly, they deliver smiles.

We cannot thank UMPS CARE Charities supporters Caroline and Tim Williams enough for their role in making this hospital visit in Toronto happen. We also want to thank photographer Michelle Prata for capturing the spirit of the day. Extra thanks to Mark, Alan, Roberto and Stu for supporting the BLUE For Kids program and UMPS CARE Charities.

To read the full story on MLB.com, click here

To learn more about our BLUE For Kids program or to sponsor a hospital visit, please email Jennifer Skolochenko-Platt.