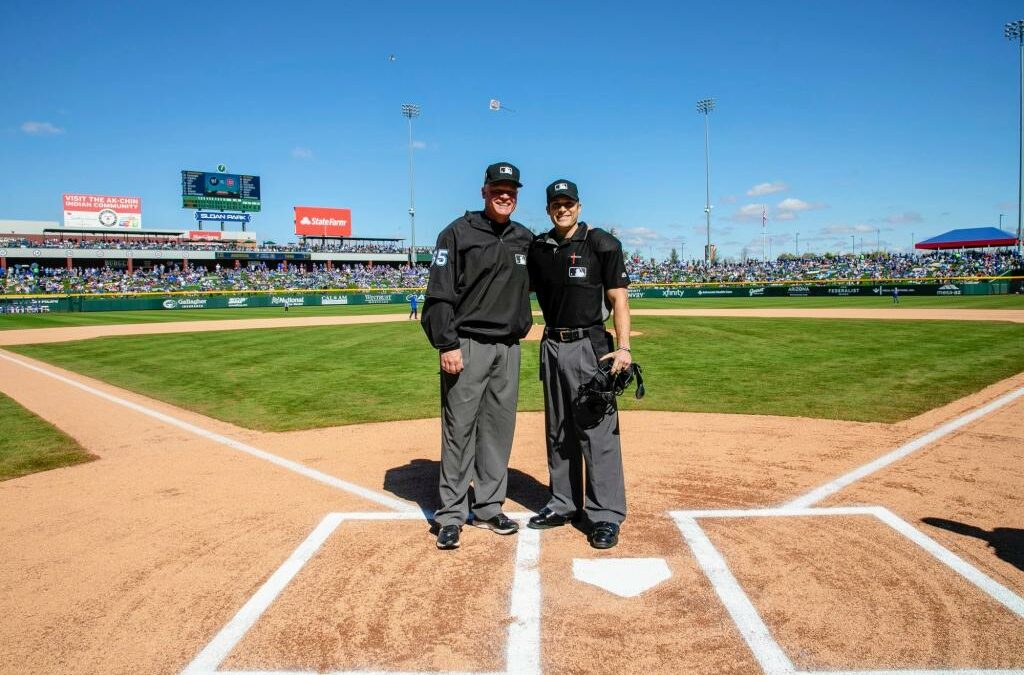 In addition to a shared love for baseball, this father-son umpiring tandem
is also committed to giving back

Over the course of Ted Barrett’s two+ decades as an umpire in the Major Leagues, he has worked the plate during perfect games (two in fact), been part of crews for All-Star Games and four World Series and this past season, he worked behind the plate for the longest World Series Games in history – a 7 hour, 20 minute marathon (18 innings) that spanned two calendar days.

All of these have been incredible moments, but there is one game that stands out – and perhaps above – them all. It was a game that didn’t determine a world champion or even count toward the regular season.

This moment came during a Spring Training game this year in Mesa, Arizona, the Cactus League home of the Chicago Cubs. Ted was named the crew chief for the game, and his son, Andrew, got the home plate assignment. Tony Randazzo and Pat Hoberg were the other umpires on the field.

“I remember what a thrill it was for me when I first walked on a Major League field with (retired MLB umpire) Gary Darling because he really encouraged me to do this professionally,” Ted Barrett said. “Multiply that feeling 100 times to be on the field together with my son.”

Up until that day, on February 23, 2019, only one other father-son tandem had ever officiated an MLB game together. Harry and son, Hunter, Wendelstedt made officiating history back in 1998.

In addition to the family milestone, the Spring Training game also marked Andrew’s debut officiating in a Big League game. Not to mention, it was a packed house with rabid Cubs fans.

“It didn’t really hit me until we were in the locker room together before the game and then on the field together” Andrew said. “I was definitely nervous getting ready for the game. the first few innings, I was pretty nervous. Then you realize it’s just like any other game, and I just focused on having good timing.

“I had never worked a game with my dad at any level,” Andrew said. “It was kind of weird seeing him out there. I kept thinking, “If there’s a checked swing, it’s going to my dad.’ ”
In addition to having his dad on the field, his mom, Tina, was in the stands, as were his grandparents. Jim and Judy Barrett. Caleb, 2, and Evan, 3 – Andrew's children and Ted's grandsons – were also among the crowd.

Judy Barrett said she usually keeps a low profile at the games, but for this one she warned fans around her not to sit near her if they were going to ride the umpires. She also informed her fellow spectators that they were going to witness history. Although they had never worked a game together prior to that Cactus League outing, it is of little wonder that Andrew is following in his father’s umpiring shoes.

Andrew was going to baseball games while he was in the womb. He grew up playing baseball, and he and a buddy of his, Travis, often would travel to games on the road with Ted.

In Ted’s mind, it was a great way for him to have some quality time with his son because he was away from home so frequently. Ted also brought son, Adam, and daughter, Amanda, for special trips to be with their dad, but Andrew and Travis really gravitated to the game.

“I would teach umpiring clinics at high schools, and I would have Andrew and Travis go out and field ground balls and do reps and they got the bug,” Ted said. “Of course, they loved traveling with me because at that point they were living the Major League life and staying in nice hotels.

Once Andrew completed his time with the Air Force, he returned to the baseball diamond.

“The stadiums in the minor leagues are nicer now than when I was working in the minors, and I think he makes just a little bit more than I did, but the sacrifices are the same,” Ted said. “He has two young boys and his wife works, so his family is making sacrifices,” Ted said. “Wherever the future takes him, I’m really proud of him.”

Unlike Andrew, who had baseball in his DNA, Ted got involved in officiating in a less directed way. He had not even seen a Major League game in person until his late teens. Ted grew up in Buffalo, New York, which does not have a big-league team, and it was only when his family moved to California that he went to a Major League game as a fan. He had umpired some Little League games growing up, but never thought about it as a career.

He went to Cal State Hayward, where he played football. One night as he walking to practice, he was told about a meeting for umpires. He could make $57 a game with three games a week. All Ted could think was that was a great way to make gas money to go visit his girlfriend, Tina, who lived across the California bay.

“I wanted to be a football coach and teach PE in high school, and maybe umpire college baseball as a side job,” Ted said.

But MLB umpiring veterans Gary Darling, Dale Scott and Mike Winters were among the professional baseball umpires who encouraged Ted to go to umpiring school and pursue a full-time career as an official.

“I was boxing at the time, and my dad wasn’t crazy about me boxing, so he said he’d pay for umpiring school in Florida,” Ted said.

The rest, as they say, is history.

Now history has a way of repeating itself.

“Sometimes I shake my head thinking about how things ended up,” Ted said. “I remember when the kids were little, and Tina was home, and I was broke,” Ted said. “I was making about $1,800 a month, and we had to pay for hotel rooms and cars. I was paying about $300 a month on phone calls back home. Tina was working at the local airports. I gave Tina permission to pull the plug on umpiring, but she never did.”

Now Ted is a veteran Major League umpire, and Andrew is working hard to get to the bigs, too.

What also makes Ted proud is what Andrew has been doing off the field. He has become a leader in Calling For Christ, a ministry of umpires which is a cause near and dear to Ted’s heart, as well as participating in events with UMPS CARE Charities.

“I’ve always taught my children that giving back is important,” Ted said. “It’s important to give people a helping hand, not a handout. All of my kids have gotten on board with this, and my parents have been involved with UMPS CARE, too.”

Said Andrew: “Ever since I was kid, I remember dad teaching me about the Bible and to live the way Jesus would want me to live.”

Judy and Jim are regular volunteers at the UMPS CARE Charities Golf Classic – one of the largest fundraisers for the organization, and Andrew, Ted and Tina were on hand for the annual bowling fundraiser put on by the Minor League Baseball umpires in Arizona, too.

“What makes me most proud is when an announcer on TV will say that Ted’s a fine gentleman and they speak highly of him,” Jim Barrett said. “He’s not only a good umpire. He’s a good person.”

Through UMPS CARE, Ted has participated in many on-the-field experiences for community organizations – bringing groups from a variety of non-profits such as Big Brothers Big Sisters, Reviving Baseball in Inner Cities (RBI) and the USO to ballparks across the county – as well as making visits to pediatric hospitals.

By chance, Andrew had a chance to participate in the BLUE Crew Ticket Program last season in Tulsa. UMPS CARE tested the programs in several minor league cities last season and has expanded the program to include all Triple-A markets this season.

“It was a lot of fun having kids from Big Brothers Big Sisters come out and the kids put on the gear and sat in the dugout,” Andrew said.

Said Ted, “I’m probably even more proud of him for doing things like that than being on the field.”