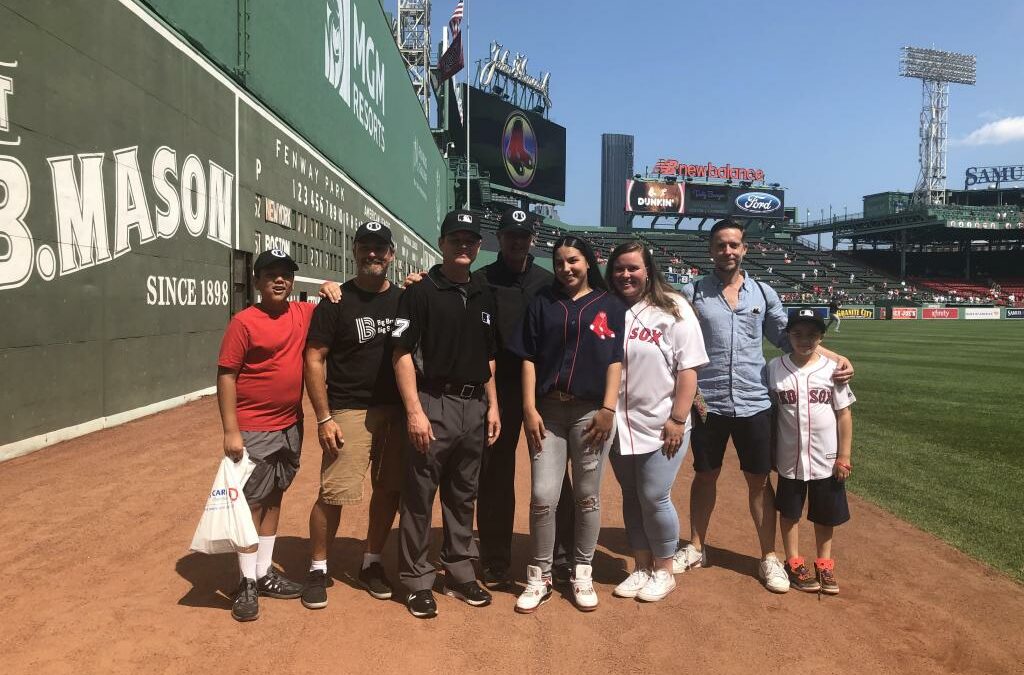 At UMPS CARE Charities, we invite groups from various organizations to join our Major League Baseball umpires before games all over the country and in Canada. If you are ever wondering why we do this … take a moment to read this letter we received.

“Joining Big Brothers Big Sisters has been wonderful and having the opportunity to see how many people and organizations have banded together to make BBBS such a successful venture, is a tremendous source of inspiration and motivation. I have only been directly involved since April, and yet I have seen so many open doors and amazing opportunities being offered to support and help and truly 'bless' the labors of those who would choose to serve, that it is humbling. So, thank you all, for all you do – it is making a very positive impact on our community and by extension, our future.

I had the chance to go to the Red Sox/Yankees game at Fenway on July 27th with my little brother and 2 other matches – we were treated like kings by Kensha (from the Red Sox) and were hosted by Major League Baseball mpires DJ Reyburn and Paul Nauert from UMPS CARE Charities.

We were having a great time with both umpires as we talked and asked about life as an umpire and all of the various aspects that have to go into being an umpire: like umpire School- decision making, self-doubt, enunciation and the other parts like, travel, referees vs umpires and the whole review process involved in controversial and contested plays (which takes place in New York and is manned by umpires who have to spend a certain amount of time each season working there)……and then… Kensha took us to an enormous door which lead out onto the warning track below the Green Monster… and it was a total goosebumps moment – we laughed and high-fived and took pictures, laughing- like whoa-!

My Little Brother said "I feel so extra-!" (kudos)(well done) (bravo) those are the kind of moments that make these events so special- Kensha could really see it and helped make it a fun time -"you feeling that?" (we totally were)

Super Big thanks to UMPS CARE Charities Care- it was such a privilege (as group leader for BBBS) to share the nice note, snacks and baseball treats to our group from you- It was truly a grand time- (and the Sox won-!) Thank you all very much. My Little had never been to a game before, and he had a great day.”

Huge shout out to the umpires who take time out all season long to make these kinds of memories all season long for organizations such as Big Brothers Big Sisters and to the staff at the Boston Red Sox for making this possible.