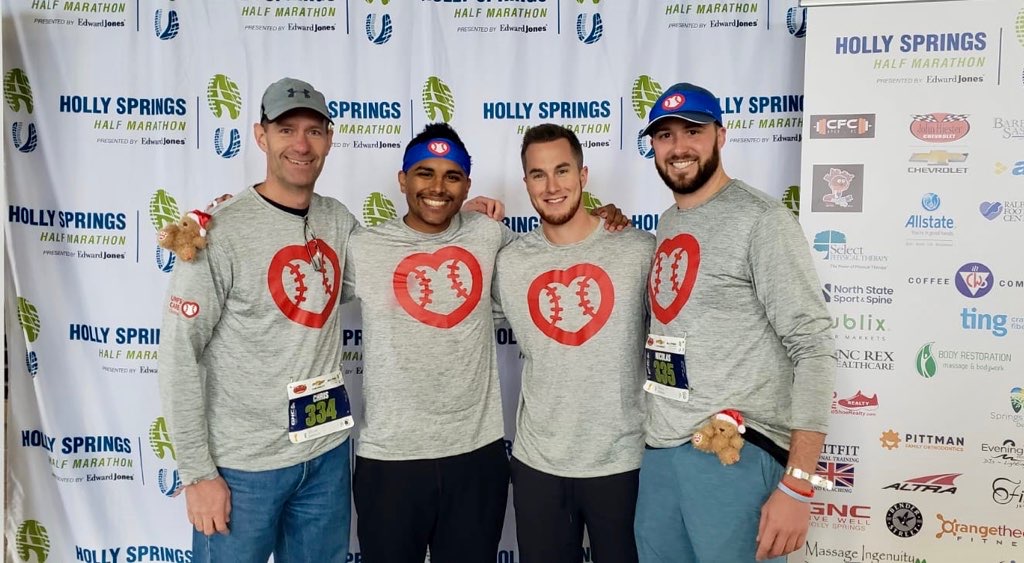 When umpires Brennan Miller, Nic Lentz and Erich Bacchus decided to train for a half marathon, they really had no idea what they were in for.

But they knew what their hearts were in for – giving back to UMPS CARE Charities.

All three umpires were out at Arizona Fall League a year ago when Nic was actively training for a half marathon. Erich and Brennan were intrigued by the idea, and soon all three of them came up with a plan to train for a half marathon and use it to support UMPS CARE programs. Nic and Brennan have both participated in our programs at the Major League level, and Erich has participated in our behind-the-scenes ticket program events at the Triple-A level.

All of them wanted to give back.

One of the most impactful UMPS CARE events Nic participated in was a visit to Children’s National Medical Center in Washington, D.C., where he and other umpires delivered Build-A-Bears to kids undergoing rigorous medical treatment.

“It is such a humbling experience going in there,” Nic told a reporter from MLive.com – a sports news website in his home state of Michigan. “We have wagons full of Build-A-Bears. Some of these kids have spent their entire life in a hospital. We give them an animal and they pick out a little outfit. It’s so humbling leaving there. We wonder why we complain about stuff and these kids have smiles on their faces. It is so awesome to be a part of it.”

Initially, the guys decided to train for the Holly Springs Half Marathon in North Carolina, and they set their fundraising goal at $2,000.

Pretty quickly, they realized they would surpass that goal. And the guys got creative with their fundraising efforts. Using social media, Erich and Brennan promised one burpee for every dollar donated within a 24-hour span.

The goal then got bumped up to $4,500 which they passed in early November largely in part to the silent auction Brennan organized at his local college/high school umpire group (Mid Atlantic Officials) in Fairfax, Virginia.

They created T-shirts and UMPS CARE-designed bandanas and even ran the race with bears on their shoulders.
By the time they ran the half marathon on November 23, they raised more than $6,100 for the charity! The funds they raised will be used to support a hospital visit with the MLB umpires next season, complete with Build-A-Bear furry friends and outfits for 100 children undergoing treatment.

They even received a special surprise at the finish line as Vincent Stio, a young umpire from North Carolina, and his parents drove up to the race to cheer on Brennan, Nic and Erich! “I thought the experience was great,” Erich told us. “We got donations from fellow umpires, family, friends and people that none of us knew. The community knew who we were (mini celebrities) and were rooting for us during the race. I had a great time running for a cause that is bigger than all of us!”

Brennan and Nic were both featured in their hometown newspapers.

Article about Nic on MLive.com

Article about Brennan in the Fairfax County Times

“All in all, it was a wonderful experience for each of us as we made a difference,” Brennan said. “It might be on a small scale compared to others but as a very famous quote with UMPS CARE, ‘We can’t all be Major League Umpires, but we can all be Major League people.’ ”

All of us at UMPS CARE Charities have been so inspired by Brennan, Nic and Erich! Their Run For the Bears was a huge success. It was fantastic to see these umpires, who give so much during the season continue to give back in their "off-season."

To learn more about how your group can organize a Run For Bears or other fundraising effort for UMPS CARE, email Jennifer Jopling.