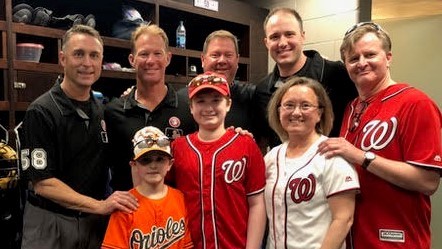 This is one of our favorite UMPS CARE memories from the 2019 season. This letter was sent to us by AJ Sauer, Lieutenant Colonel, U. S. Marine Corps, (Ret.), following his family's BLUE Crew Ticket program visit with UMPS CARE before a Washington Nationals game in May. UMPS CARE partnered with USO – Metro for this special visit. We spoke with AJ recently, and we are thrilled to report that his son, Parker, has had clear scans for treatment for a form of Hodgkins' Lymphoma and is back on the mound pitching! Parker turns 13 in January.

First – a huge thank you to the folks at UMPS CARE for the incredible experience at Nationals Park. The casual baseball fan would have been impressed, but baseball aficionados, like our boys, were absolutely thrilled. The interaction with the officiating crew was phenomenal.  The guys were super nice, had great conversations with the boys, and were very accommodating.  A truly fantastic experience.  My wife and I are so incredibly grateful for everything UMPS CARE and USO Metro has done for both our boys.
One anecdote…and my apologies for its length.  When my wife and I first learned of Parker’s diagnosis of a form of Hodgkin's Lymphoma, we were absolutely crushed!  As most of you know, Parker eats, sleeps, and breathes baseball…he plays it, watches it, reads about it…  In my search for inspiration for him, I came across the story of Anthony Rizzo and his battle with Hodgkins Lymphoma.
The day he received his official diagnosis, Parker sat across the table from his team of doctors. I watched in awe as he matter-of-factly listened to his diagnosis, the description of his cancer, and the course of treatment he would begin the following week. When the doctors where finished, they asked if he had any questions – he had two. First he asked if the cancer had spread to any other parts of his body. His second question was “Can I still play baseball?”  That’s when I told him the Anthony Rizzo (and Jon Lester) story. He nodded his head and said “Okay.” That was it. No tears, no anger…just “okay” – as if to say, “I got it…now let’s get on with business.”
Two days after his first chemotherapy session, he and Morgan asked to go to the “card shop,” a local sports memorabilia shop here in Northern Virginia. I bought them each two completely random packs of Topps 2019 baseball cards.  By pure chance, one of Parker’s packs of cards contained an Anthony Rizzo authentic jersey card. I don’t know the odds of getting a jersey card – but it must be huge. The odds of Parker getting that specific card – only two days after his first chemotherapy session has to be astronomical!  So now Parker and Anthony Rizzo were inextricably linked. He would later receive a wonderful letter and autographed photo of Anthony from his foundation (they are cc’d in this email).
That leads me to the Nats-Cubs game:  While talking with our hosts during batting practice, I briefly relayed this story, Parker’s link to Anthony Rizzo, and how ironic it was that we’d be given such a generous opportunity by UMPS Care when the Nationals were playing the Cubs.  Nic (one of the umpires) matter-of-factly said, “Let’s go see if we can find Anthony…”  So down the steps of the Cubs dugout Parker and Morgan went (their Nationals host in tow).  While my wife and I stayed on the field, the boys met with Anthony Rizzo himself.  He and Parker talked baseball (of course), discussed their respective battles with cancer, talked chemotherapy briefly, with Anthony telling Parker that he too didn’t loose his hair during treatment (Parker still has his hair – but is concerned that he may still loose it).
And then there’s the Topps jersey card…the attached photos are of us with our hosts, the boys talking with Anthony Rizzo, and Parker getting the card signed.
An incredible string of events, linked together by baseball, all culminating at Nationals ballpark thanks to the generosity of all of you and the help of the officiating crew of the Nats-Cubs game.
My wife and I are so truly grateful and thankful for your efforts and kind generosity.  It turns out that in the end, baseball will indeed be the thing that gets us through this whole ordeal.
My best wishes to all of you…and my heartfelt gratitude for everything you have done for my family!
Semper Fidelis,
A. J. Sauer
Lieutenant Colonel, U. S. Marine Corps, (Ret.)