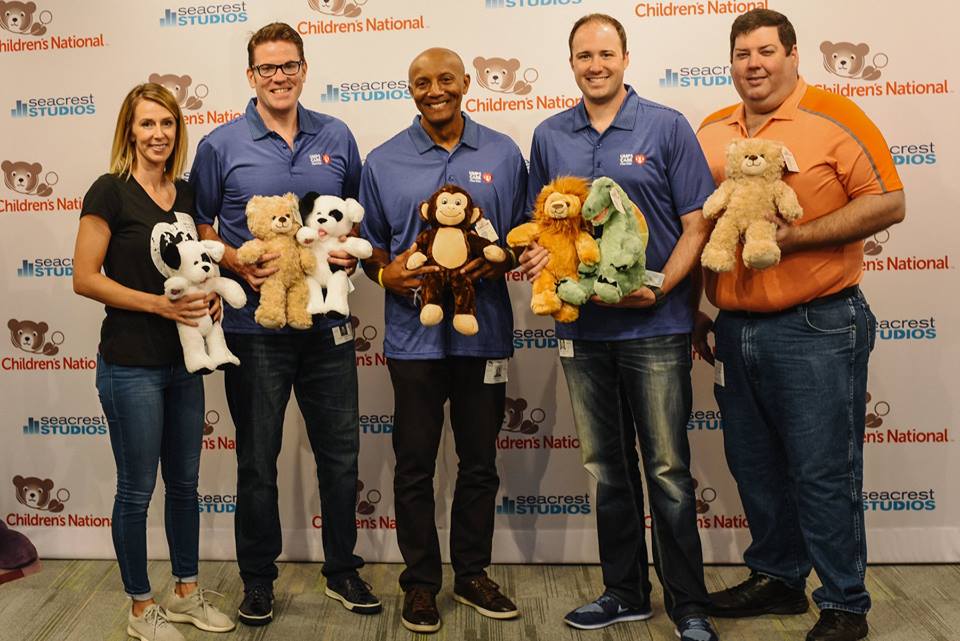 By Kevin Cuddihy (far right in photo above)

My involvement with UMPS CARE Charities is the direct result of being in the right place at the right time–and knowing the right people.

David was a baseball stats guy, almost beyond compare, and had two areas of expertise. The first was home runs, and he made a national name for himself in this area. The second was umpires; he could tell you how many games a particular umpire had worked the plate, how many no-hitters, ejections, everything.

He was also friends with Samuel Dearth, the first executive director of UMPS CARE and one of the men who helped build the charity from the ground up. UMPS CARE had just started beefing up its hospital visits and was in the market for someone to write about them. “Do you know anyone,” Samuel asked David, “who might be interested in writing for us as a volunteer?” David smiled, nodded, and immediately got in touch with me. “I mean, it’s not like you’re doing anything right now,” he joked.

I’ve been a lifelong baseball fan, so I immediately jumped at the opportunity. Support a great charity while staying involved in the sports world? Yes, please! And so that summer, from the comfort of my condo in Oakton, Va., I called hospitals around the country and asked how the UMPS CARE visit went. I called umpires before and after ballgames and asked them how the visit impacted them, what it meant to them, and the ways it resonated inside them.

The way these men spoke about a simple hospital visit made it immediately clear that these visits were by no means a simple act—for the umpires or for the children who were on the receiving end of a Build-A-Bear Workshop. The visits were infused with meaning, with thanks, with smiles, and with gratitude; and all that flowed both ways. It was the same, I later found, with the BLUE Crew Ticket Program. Umpire after umpire repeated a variation of the same mantra: “We’re supposed to be doing something special for these kids, but the way they make us feel is even better.”

Six articles in and I was hooked, even after finding full-time employment in August 2009. The following spring, Samuel introduced me to the UMPS CARE Online Auction, and I chipped in with writing some of the item descriptions. Over the years, that’s evolved into writing just about all of the descriptions and taking the majority of the photographs of the donated items as well, and these past few years I’ve branched out into helping acquire some of the donations as well.

I’ve contributed when and where needed in multiple other areas throughout my decade-plus with UMPS CARE: writing website copy, putting together newsletters, creating graphics, brainstorming, tweeting, interviewing umpires for the “Get to Know an Ump” section as well as recipients of our “All-Star Scholarship” program, and going back to my roots and writing about hospital visits. I’ve even been blessed enough to participate in a couple of them in a support position.

And the people behind UMPS CARE Charities, from the staff to the umpires, have always made me feel appreciated, important, and valued. I never feel like I’m bothering them with a question or idea, and always feel listened to and respected. It’s a wonderful organization to work for, with amazing people doing awesome work to help kids in need.

I’m proud to support UMPS CARE Charities, to wear the heart, and to provide any and all support I can to their work. The slogan of the charity rings as true today as when I first started volunteering for them: Helping people is an easy call.

Thanks Kevin, for all you do for us at UMPS CARE Charities – we are so glad to have you as part of our crew! And we are proud to say that through February 2020, our UMPS CARE volunteers have already invested 641 hours toward supporting our endeavors! Learn how to get involved with UMPS CARE and our events and programs by emailing jenn@UmpsCare.com