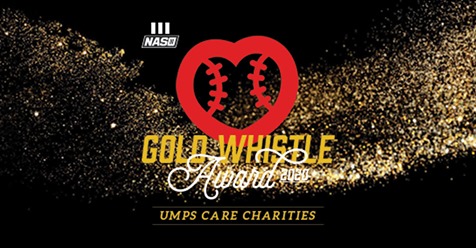 NASO will present the award to UMPS CARE on Tuesday, July 28, during the Celebrate Officiating Gala, sponsored by Fox 40 International. The Gala marks the end of the annual Sports Officiating Summit, which will be held in Montgomery, Alabama.

The Gold Whistle Award is presented annually by NASO. Those considered are individuals or groups that have made significant contributions to the betterment of officiating, exhibit a high degree of integrity and
ethics and other qualities that are held in high regard by the industry. Candidates must have a consistent
record of presenting officiating in a positive light as well as exhibiting a “service above self” attitude. Public service to officiating, having a motivating effect on others and/or strong community involvement are
considered.

“We are really just thrilled, honored and humbled to receive this prestigious honor,” said Jennifer
Skolochenko-Platt, UMPS CARE Executive Director. “Our Major League Baseball umpires take countless hours out of their schedule every season to give back to the community through the game they love. It is
rewarding to work with such a dedicated group of people who truly use their role in sports as a vehicle to help others.”

“Our umpires know that life is more than balls and strikes,” UMPS CARE president and retired MLB umpire Gary Darling said. “We started off as a grassroots organization and our guys have taken ownership of this charity. It is great to see their work being noticed throughout the officiating community. We are honored to have our work recognized by such a first-class organization as NASO.”

Founded in 2006 through the compassion of the MLB umpires, UMPS CARE provides financial, in-kind and emotional support to children and families. Through its creed, “Helping People is an Easy Call,” MLB umpires invite youth-based organizations to memorable behind-the-scenes visits at all 30 Major League ballparks, in addition to delivering Build-A-Bear Workshop® experiences to critically ill children undergoing treatment at pediatric hospitals across the country and in Canada.

Another major component of the UMPS CARE Charities is the All-Star Scholarship Program, which awards approximately $40,000 annually in college scholarships to children adopted later in life and has distributed more than $240,000 to date. This program includes on-going mentorship from MLB umpires and their families to ensure long-term success.

“The Gold Whistle Award is presented to someone or some organization that has shined a positive light on sports officiating,” NASO President Barry Mano said. “We include in our selection process consideration for how long that positive light has been lit. In the case of UMPS CARE, it has fulfilled both the impact and the longevity components in superb style.”

“The charitable service being provided in so many communities by UMPS CARE is simply breathtaking,” Mano said. “Year in and year out this group of baseball umpires, through the organization they created, not only helps those with a need, they also help those of us in sports officiating to think better of ourselves. That is the exact reason NASO created its Gold Whistle Award. UMPS CARE is so very much deserving of this recognition.”

About UMPS CARE Charities:  Founded in 2006 through the compassion of Major League Baseball (MLB) Umpires, UMPS CARE Charities, UMPS CARE provides financial, in-kind and emotional support for America’s youth and families in need. The UMPS CARE mission puts into action our established creed, “Helping People is an Easy Call”. Through our youth-based programs, professional umpires enrich the lives of at-risk youth, children coping with serious illness and military families by providing memorable, once-in-a-lifetime, baseball experiences. Umpires make baseball magic on baseball fields across the country and give children reason to cheer by bringing Build-A-Bear Workshop® experiences to them while they are undergoing rigorous medical treatment at hospitals. Through our All-Star College Scholarship initiative, we offer financial support to children adopted later in life.