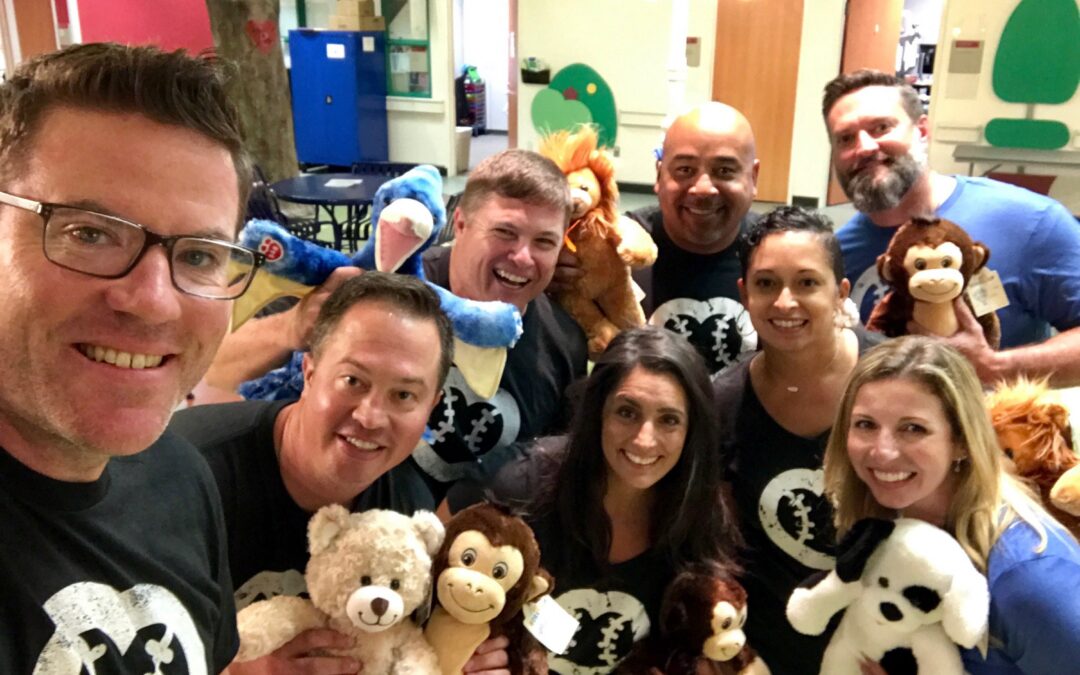 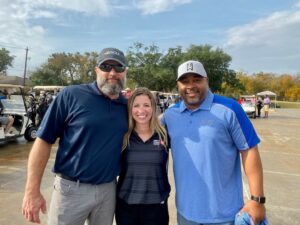 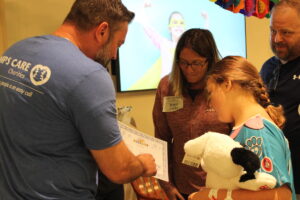 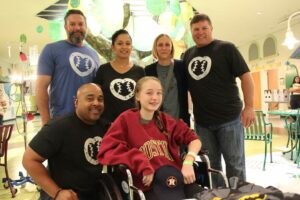 April is National Volunteer Month, and we thought we would take time out to spotlight two special UMPS CARE volunteers and supporters, Courtney and Chris Bonham.

Courtney and Chris Bonham spent nearly four years of their lives in and out of children’s hospitals as they tried to take care of their daughter, Riley, who had suffered an injury at birth.

Their young daughter had been deprived of oxygen during delivery and struggled throughout her short life until sadly, she passed away at the age of just 3 ½.

Courtney and Chris found out that when you are parents with a sick child in the hospital, any type of positive interaction or simple activity that brings a smile to your child’s face will brighten the whole family’s day. Chris recalled one day when Riley was undergoing treatment at Children’s National Medical Center in Washington, D.C., when some teenaged girls came bouncing in with small toys for kids.

“Something like that just has a huge, huge impact, especially when you’re a family that is essentially hopeless … something as small as a stuffed bear … I wouldn’t go as far as saying it gives you hope but it’s really such sunshine. Those types of things have an everlasting impact.”

Riley passed away 13 years ago, but the Bonhams still have that bear as a special keepsake.

Years later, Courtney and Chris had two more daughters, Madeleine and Harlow, and were living in Houston. Chris had grown up playing baseball, and his daughters followed in his cleats and played softball. They became friends with two girls on their teams who happened to be the daughters of Major League Baseball umpire Adrian Johnson (A.J.) and his wife, Nicola.

“We were friends with A.J. and Nicola for a long time before I even knew what he did,” Chris said. “It’s kind of hard to believe that we had never gotten into a conversation about what do you do, but he’s not the kind of guy who brags about himself, either.”

A.J. and Nicola coordinate an annual golf tournament in suburban Houston to support UMPS CARE Charities, and so A.J. invited the Bonhams. They didn’t know much about the charity at the time, but the more they learned about it, the more they realized it was a perfect fit.

Because of their journey with Riley, they knew firsthand what impact the UMPS CARE BLUE For Kids hospital program can have for families in hospitals nationwide. Ever since 2006, umpires have been taking time out of their schedules to visit children in pediatric units and deliver Build-A-Bear furry friends and outfits. Since the program’s inception, UMPS CARE has delivered more than 16,000 Build-A-Bears to children battling critical illnesses.

“We know exactly what this means because we have been that family,” Chris said.

Courtney and Chris joined UMPS CARE at one of these visits at Children’s Memorial Hermann Hospital in Houston, the same hospital where Riley had passed away.

“The last time I walked out that door it had not been a happy day,” Courtney said.

But this time, when she walked out, she had an overwhelming feeling of gratification.

“I would deliver bears every day of every week if I could,” Courtney said. “I really am happy to be a part of this.”

Courtney and Chris have become dedicated volunteers with UMPS CARE and regulars at the Johnson’s golf tournament. Chris is a project manager with BRH Garver, and he has encouraged several of his business partners to get involved with the charity as well.

Courtney decided to organize a fundraiser for UMPS CARE with Kendra Scott jewelry in February. Riley’s birthday was Valentine’s Day, and Courtney’s fundraiser was held just before that milestone date.

“Adrian and Nicola do so much for the community,” Courtney said. “It just makes me feel humbled and I want to help out as much as I can.”

Thank you, Courtney and Chris for all that you have done and continue to do to support UMPS CARE Charities. For information about ways you can volunteer with UMPS CARE, email Jennifer Skolochenko-Platt at jenn@UmpsCare.com.