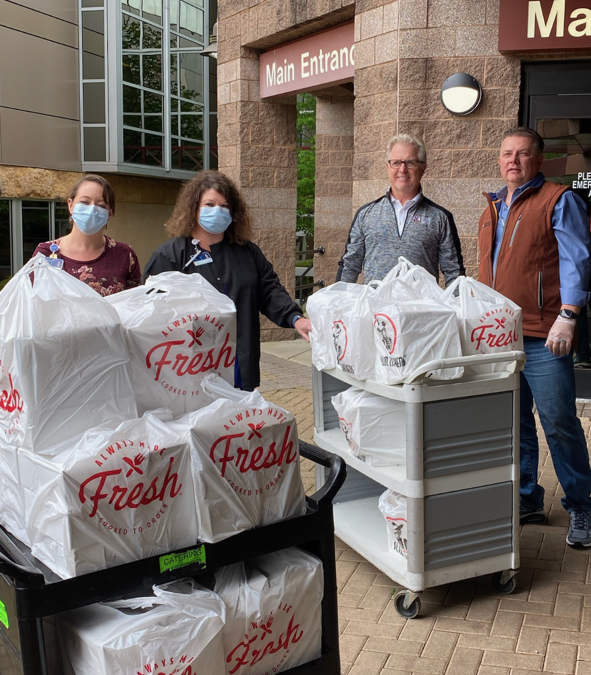 Major League Baseball umpire Greg Gibson wanted to do something for his hometown community of Boyd County in Kentucky, in the wake of the coronavirus pandemic.

He knew how tough things have been for the hospital workers on the front line.

But his mother, Joyce, had spent 10 years working as a housekeeper at King’s Daughter Medical Center in Ashland, Kentucky, and Greg thought about all the employees behind the scenes who make the hospital click – the unsung heroes such as the housekeeping staff.

“There are many people who have been working hard during these challenging times – people who might not be on the front lines but whose work is vital in helping the hospitals treat patients,” Greg said. “We wanted them to know how much they’re appreciated.

Greg has worked an All-Star Game (2008), a World Series (2011) and even called a perfect game when Randy Johnson blazed past the Atlanta Braves on May 18, 2004. During these times, however, he just wanted to make the easy call of helping others.

In addition to officiating games in the big leagues, Greg also runs Greg Gibson Insurance and Financial Services. It is a local outfit with five employees (including himself). One of his team members, Rich Mahar, has a daughter who is training to be a nurse, and he wanted to help, too.

So last week, Greg, Rich, Joyce and Greg’s wife, Michelle, delivered 150 boxes of chicken dinners to the hospital’s support staff. Each box included three pieces of chicken, fries and some bread. The hospital supplied the drinks.

The day they made the deliveries was special in and of itself, but it also marked the one-year anniversary of Michelle’s father’s funeral.

“He loved doing things like this and giving back,” Greg said of his late father-in-law.

All of us at UMPS CARE Charities know how important it is to give back to the community – as our established creed is “Helping People Is An Easy Call.” Thank you Greg and all of the umpires who have taken time out to reach out to others during these challenging times.

We know there are a lot of umpires out there doing great things on and off the field, if you are an umpire want to share your personal story or give a shout out to an umpire in your life, please email Amy.Rosewater@UmpsCare.com #Helping People is an Easy Call